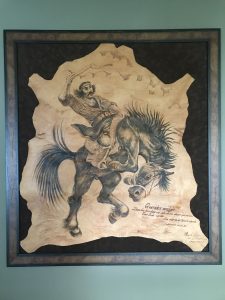 Argentina started the process with a week-long series of community discussions the week of May 18 to 25, 1810. In 1816, the Tucumán Congress was held to declare independence. The declaration was signed on July 9, 1816.

On July 9, it is appropriate to highlight my Argentine roots and some things my family has contributed to that country.

My mother is Argentine, so I grew up speaking Spanish from early childhood. I have a younger brother and sister, and we moved to Argentina when I was eight. There we joined the rest of my mother’s family.

My grandmother was a Chouciño Justo. Her father was Chouciño and her mother was Justo. She had two uncles on the Justo side who were prominent in Argentine politics: Agustín P. Justo, a colonel, and Juan B. Justo (Juan B), a doctor. These cousins had diametrically opposed political views and were leaders in their parties. Agustín became president. Juan B was a senator and founded a political party. We had lively conversations at the dinner table around election season!

He made a lasting imprint in Argentina. There are many streets named after him in Buenos Aires.

My grandmother was also an entrepreneur. She started a non-religious bilingual private school in Vicente López, William H. Hudson. That is where I went from 3rd grade to 10th grade. It was my first school and had an excellent reputation for academics.

My grandfather was Bernardo Stern Chertkoff. His father was Stern, and his mother was Chertkoff. His parents left Odessa, Russia around the year 1900 because of persecution. They attempted to emigrate to the US but were turned away, so they emigrated to Argentina. Once in Argentina, they joined Juan B. Justo’s group.

Since Juan B was also a doctor, while my grandfather studied medicine they spent time together. He also participated in Juan B’s political activities. Later, my grandfather founded the first union hospital in Argentina for the Railroad Union.

After I moved to Argentina we lived with my grandmother, who was a widow. I wasn’t able to spend time with my grandfather, but connected with the things he had left in the attic. I found his old medical tools and prescription pads there, and they became my toys and scratch paper… until my grandmother found out and confiscated them, of course. When I graduated from high school, I went straight to medical school at the University at Buenos Aires because I loved science and wanted to help people. That lasted until I lost patience with rote memorization, but I still love medical topics! That is why I am a certified medical interpreter and I seek out relationships with medical organizations as a translator.

After that, I went to teacher training school. At my grandmother’s school, I had done substitute teaching English to first-graders when I was in 7th grade and had been on the payroll in 10th grade, teaching English to high school students with no previous knowledge of English. I continue to teach today, as I train translators and medical interpreters to pass certification exams, and I give other workshops.

The summer before my 10th grade, while my grandmother went back to the school to do administrative preparation work, I realized the Hudson library was not well organized. I couldn’t find the resources I wanted. I spent a month arranging it, and I set up a checkout and check-in system. I became the volunteer school librarian. I have been organizing projects ever since.

I grew up with role models who served others, stood up for their values, and did things with excellence. As a translator and interpreter, I hope to help make the world a better place as well.

Helen Eby grew up in Argentina, the land of the gauchos. She is certified as an English Spanish translator by ATA and as a Spanish interpreter by the Oregon Judicial Department and by the Oregon Health Authority. She co-founded The Savvy Newcomer and the ¡Al rescate del español! blogs, both of which are team efforts to provide resources for other language professionals. She is also a founding board member of the Spanish Editors Association.
Page load link
Go to Top