Celebrating my US heritage on the 4th of July 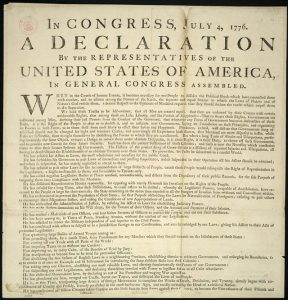 United States Declaration of Independence. Image from US Library of Congress

My maiden name is Helen Slack. James Slack is a direct ancestor of my paternal grandfather. He helped George Washington cross the Delaware River and win the Battle of Trenton on Christmas Eve of 1776. He was the operator of the Johnson Ferry House, and this is memorialized at Washington Crossing, in Pennsylvania. I grew up knowing that he was important. We visited Washington Crossing a lot when I lived in Newtown, Pennsylvania, the first 8  years of my life! When I visited Newtown recently and asked where the Old Church was so I could see the Slack tombs, the response was: “Oh! That is an old family!” I wasn’t aware of that. I showed David, my husband, the school I went to. Now it is a historical building. One of the classrooms was maintained for public view, and it was just as I remembered it.

We played “Washington crossing” in our leaky boat in the creek every summer. Every time friends came over in the summer, we would drag our boat, full of leaks, into the creek, and pretend we were crossing the Delaware with Washington. Of course, it reliably sank in the middle of the creek and we got soaked, which was great on a hot summer day! In the early 1960’s, it was better than the air conditioning we didn’t have! The creek was shallow, and there was no danger of drowning.

James Wilson, a direct ancestor of my paternal grandmother, Helen Kerr Wilson, was a signer of the Declaration of Independence. He was one of the members of the Pennsylvania delegation. He was born in Scotland, where he went to college. He emigrated to America in 1766, where he taught at the Philadelphia College.

In 1774, he attended a provincial meeting as a representative of Carlisle, where he had a farm, and wrote a pamphlet titled “Considerations on the Nature and Extent of the Legislative Authority of the British Parliament.” In it, he argued that the Parliament had no authority to pass laws for the colonies. It was published, and later found its way to the Continental Congress, where it was widely read and commented on.

He strongly argued for Independence, but he respected the will of those he represented and took time to consult with them before voting against their beliefs.

He served as a leader in the Democrat-republican party, was elected to Congress, was appointed to the Constitutional Convention, and was appointed Associate Justice of the Supreme Court in 1789.

You can read about the lives of all the signers of the Declaration of Independence on this page.

The Pennsylvania Signers had an amazing mix of talents. Some were born in the United States, others were natives of Great Britain. Some had started off as Tories, others had not. They all were men who took a stand for what they believed: that the colonies had a right to make their own decisions. Like today, they probably had lively arguments at the Congress!

It is an honor to know my father’s side of the family contributed to founding the United States of America in such a direct way.

Helen Eby grew up in Argentina, the land of the gauchos. She is certified as an English Spanish translator by ATA and as a Spanish interpreter by the Oregon Judicial Department and by the Oregon Health Authority. She co-founded The Savvy Newcomer and the ¡Al rescate del español! blogs, both of which are team efforts to provide resources for other language professionals. She is also a founding board member of the Spanish Editors Association.
Page load link
Go to Top